Can you believe how close we are to the end of the year? Yowza!! So here is my second-to-last goal for 2013.

I am going to finish a table runner for my friend Whitney. Whitney also lost her Dad recently and so we were emailing each other and sending virtual hugs. At the same time we had both shown interest in an Autumn swap on Flickr that filled up before we could join. Whitney suggested a side-swap to help with the healing process, to which I readily agreed.

I am making her a table runner and she will make me a hanging for my office (basically a table runner without a table LOL)... we just moved office digs and it will be nice to have something quilty there everyday.

I thought I could attach an in-progress picture but I took it with my Mom's iPad and so don't have it on my computer (yet another strike against extra technology lol).

So once again, I present Opie :) 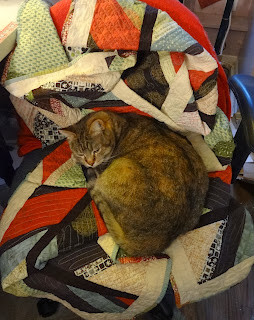 I am linking up with ALYOF!

p.s. Opie is sleeping on the amazing quilt my friend Teri surprised me with for my birthday! Love it!
Posted by LethargicLass at 9:12 AM